This thesis aims to determine the process of issuing the bill of lading at PT. Samudra Indonesia
and the legal consequences in the process of issuing bill of lading through sea transportation.The
method used in writing this final report is a normative-empirical method, the data used is
primary data, namely data obtained by direct interviews with PT. Samudra Indonesia Makassar
branch and secondary data obtained from literature/books, documents and laws and
regulations.The results of this study indicate the publishing process Bill of Lading
(consignment). In the implementation of issuing the Bill of Lading, the Shipper places an order
for the ship (booking space), makes Shipping Instructions (SI), Shipping Instructions are then
sent to the Shipping Company to do a Stuffing Report, after doing a Stuffing Report publishing
Draft Bill of Lading, Shipping Line and Shipper represented by PT. Samudra Indonesia's
correction has been completed and it is correct that the Bill of Lading has been issued. The legal
consequences in the issuance of this bill of lading are the birth of rights and obligations on the
agreed agreement, namely,the carrier binds to carry out the safe transportation of goods or
people from a certain destination, while the sender binds himself to pay the cost of transportation
and the expeditor is an intermediary who is willing to serve the transportation of goods and is
responsible for ordering transport, as for the consequence of not carrying out the obligation to
cause a default, namely the party the defaulter compensates for the loss to the aggrieved party. 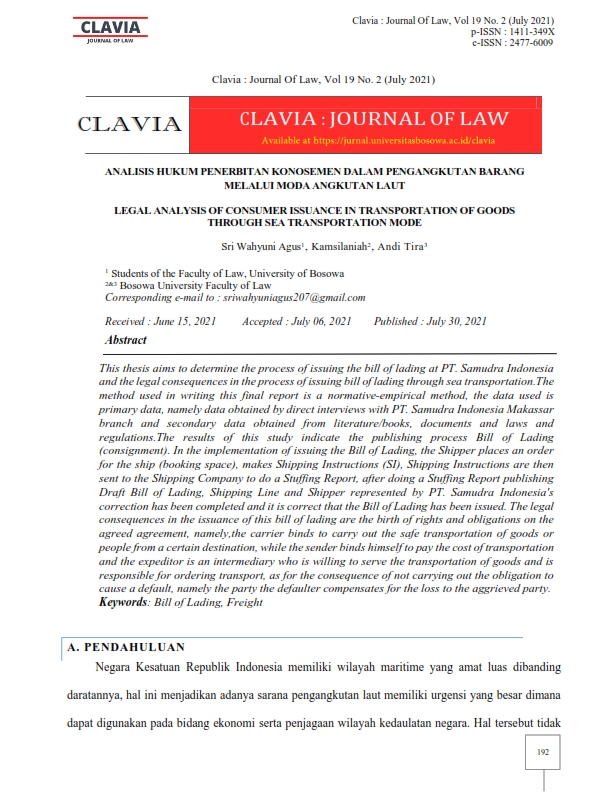